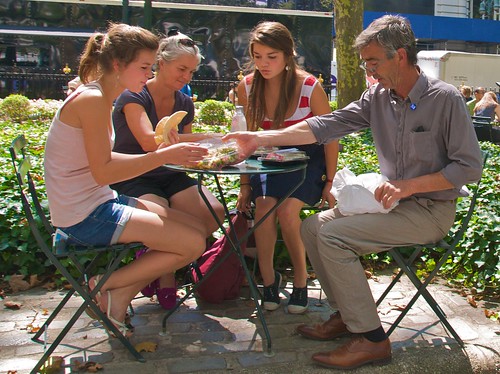 Image by Ed Yourdon
Note: this photo was published in a Jun 18, 2010 blog titled "Family dining in DC. Celebrate Kids Restaurant Week, June 20-27." I’m always amazed by the mis-matched "context" in some of the publications of my photos: this picture was taken in Bryant Park, in mid-town Manhattan (that’s part of New York City, in case you’re from Mars); but the blog describes various outdoor restaurants where families might enjoy a pleasant lunch in Washington, DC. Oh, well…

Moving into 2013, the photo was published in a Jan 14, 2013 blog titled "Weight loss with hypnosis and planned pregnancy?"

I had a lunchtime dentist appointment in midtown Manhattan the other day, and when it was over, I decided to walk a couple blocks over to Bryant Park, behind the New York Public Library. It was a sunny day, and I thought I might see some gorgeous babes sunbathing on the park lawn in their bikinis (even being an amateur photographer is a tough job, but someone’s gotta do it). If not, I thought perhaps I’d find some photogenic tourists or oddball New Yorkers that I could photograph.

As it turns out, almost all of the central lawn was being covered over with some kind of wooden platform — presumably for an upcoming concert performance of some kind — so nobody was sunbathing out on the grass. But since that area was unavailable, and since it was still the lunchtime period, the periphery around the central lawn was chock-a-block with people. There’s now a cafe immediately behind (i.e., to the west) of the library itself, and it was doing a land-office business. And all along the north and south sides of the park, as well as the broader western side, there were tables and chairs and benches where people could enjoy their lunch with whatever food or entertainment they had brought along.

I was already aware of the pentanque court on the western side of the park, and knew that I’d find one or two good pictures there. But I didn’t realize that the Parks Department had set up two ping-pong tables, as well as several tables for chess-players. In addition, there were a few card games underway, and there was also a section set aside for people who wanted to borrow local newspapers to read.

As for the people: I had to remind myself that because Bryant Park is smack in the middle of mid-town Manhattan (a block away from Times Square, filling the square block between 41st/42nd street, and 5th/6th Avenue), most of the people enjoying their lunch were office workers. So the men typically wore slacks and dress shirts, and a surprising number of them were also wearing suits and ties. The women wore dresses and skirts, and generally looked quite fashionable and presentable. Of course, there were also tourists and students and miscellaneous others; but overall, it was a much more "upscale" bunch of people than I’m accustomed to seeing in my own residential area on the Upper West Side.

I was surprised by how many people were sitting alone — eating alone, reading alone, listening to music alone, dozing alone, or just staring into space alone. You’ll see some of them in this album, though I didn’t want to over-emphasize their presence; equally important, many of the loners just weren’t all that interesting from a photogenic perspective. So you’ll also see lots of couples, some children, a couple of families, and occasionally larger groups of people who were eating and chatting and enjoying the warm summer day.

Three activities dominated the scene, all of which were fairly predictable, under the circumstances: eating, reading, and talking on cellphones. You would expect people to be eating at lunch-time, of course; and you wouldn’t be surprised at the notion of people reading a book as they sat behind the New York Public Library on a warm, sunny day. But the pervasiveness of the cellphones was quite astonishing … oh, yeah, there were a few laptops, too, but fewer than I might have imagined.

I’ve photographed Bryant Park several times over the past 40 years, going back to some photos of 1969 Vietnam War protest marches that you can see in this album. I was here in the summer of 2008 to take these photos; I came back in January 2009 to take these photos of the winter scene; and I returned again for these pictures in March 2009 and these these pictures in the late spring of 2009; all of these have been collected into a Flickr "collection" of albums that you can find here. But if you want to see what New York City’s midtown office workers are doing at lunch, take a look at what’s in this album.

Weight Loss Hypnosis: it’s not just about the food! 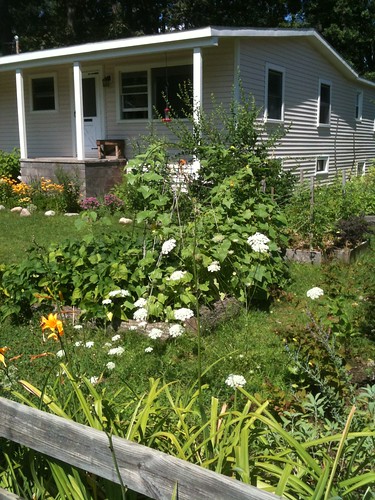 Image by markshepardnlp
Last summer we expanded our front yard garden and had tons of cucumbers, beans, tomatoes, greens and more. When the food is good and a part of your life it’s easier to eat what is good for you. Instead of fighting your mind and living in an emotional and mental state of lack. Cultivate the garden of your mind…
Weight Loss Hypnosis